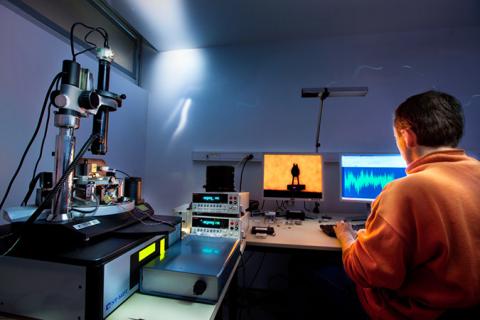 CETHIL is at the forefront of current experimental analyses of thermal effects at the submicron and nanometer scales. It has developed a platform of thermal microscopy with local micro and nanoprobes, by applying a technique based on atomic force microscopy where thermal sensors have been placed at the end of the probe. The technique is called Scanning Thermal Microscopy (SThM). SThM microscopes can be used for local thermometry measurements (surface temperature) or for local thermal properties measurements: thermal conductivity (thermal conductance when conductivity is not defined anymore) or phase transition temperature (especially for polymers). Nanostructured materials or electronic chips subjected to localized heating ("hot spots") may in particular be characterized, with spatial resolution ranging from few microns donw to few nanometers depending on the system being investigated and the conditions of operation.

This SThM platform is the most developed in France on this theme, with three commercial SThM microscopes (NTMDT, CSI, CPR) and two SThM microscopes developed internally using piezoelectric actuators (Attocube). Microscopes can be operated under vacuum for better spatial resolution. One of these SThM microscopes is operated in situ in a Scanning Electron Microscope (SEM) in partnership with the Institut Lumière Matière, allowing for precise positioning on nanometric objects or direct observation of the {tip-sample} system.

Some of the most recent instruments were developed during the European project QuantiHeat (2013-2017, 20 partners across Europe, 10M€ budget) devoted to thermal nanometrology, which was coordinated by CETHIL.