CETHIL is installed on a total surface of about 2500 m², spread across three sites under the INSA Lyon jurisdiction on the La Doua - LyonTech campus.

The offices are located on the 2nd and 3rd floors of the Sadi-Carnot building. The experimental devices are distributed between the Sadi-Carnot, Claude-Chappe and Gustave-Eiffel buildings. You can refer to the plan associated with this page for more information (under the left menu).

CETHIL benefited from the "Plan Campus" initiative, which allowed a partial renovation of its main building, the Carnot building.

How to get to CETHIL from the airport or the Part-Dieu train station? 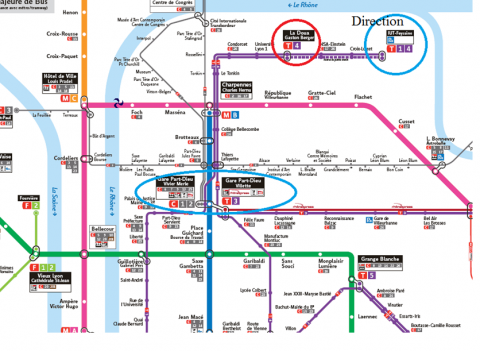 The tram stop nearest to the Sadi-Carnot building is "La Doua Gaston Berger" (the following stop "INSA Einstein" is also a good choice, especially to go to the Gustave-Eiffel building). Follow the tram rails in the direction you came from, then turn left after about thirty meters in the "Rue de la Physique" (see pictures below). The Carnot building is less than a hundred meters away.

The hotel closest to campus is the IBIS Styles Villeurbanne. There are other hotels nearby, but they are only accessible by bus and not immediately by tram.